One of the challenges I face (indeed, we all face), when we read the "New Testament" in the Bible, is the matter of context. A lot of the Biblical material is based in Greek philosophy. If you don't understand Greek philosophy — particularly Plato and Aristotle — you'll have trouble figuring out what the New Testament writers were saying, particularly outside the gospels and the Acts of the Apostles.

We all live in a specific context. Our 21st century context is radically different from that of the New Testament writers and their ethos of Greek philosophy. And, as in everything else, much gets lost in translation.

I find it increasingly frustrating to have to deal with the Greek philosophy, which influenced the Christian Church well into the middle ages (and in some cases, right up to today). I'm not alone in that. When the Renaissance came along, people were thinking "outside the box" of Greek philosophy — and the battle lines were drawn along that front. (The people who say it was "science versus religion" do not understand the deeper philosophical context that motivated the battle.)

Today, there is much science can tell us about life. which is good. And there is much, particularly about relationship, which science cannot, at this point, measure. Love is one of those items; "compassion" (if you prefer that word). Neither of those is logical or based in science, yet we dare to believe in them.

One of the biggest problems I feel about the Bible or indeed many of the ancient/old texts is where do women fit it especially in the context of how we live now. Obviously being a female I am particularly interested in how women fit in a society which seems far more complicated than even the one my Mum grew up in.
Now it's not science per se I am talking about but without the leaps forward in that understanding women I feel woul dnot be in the position we are in today - heck I am not sure if that makes sense or in anyway has anything to do with teh post...though I feel it does but hey I get easily confuswed.

During the Christian church's first couple of centuries, there are references to female bishops. Then Constantine mixed mixed the counter-culture with the culture and formed a new culture. The church has yet to fully recover from that process.

Have you read Snowbrush's last couple of posts? He asks a lot of good questions which beg to be answered. Where is CS Lewis when we need him? Will you sub in?

Rob-bear, when you do decide to leave your lair you start grumbling and pontificating. We love it! How is it that you decide to stay away for six months?

Blog Fodder...I love C.S. Lewis...sigh. Yes, where is he when we need him?
Jackie

® Blog Fodder: Will check with Snow. Sub in for Lewis? Bear is not THAT smart.

® Nollyposh: Bear hugs to you.

® lakeviewer: I only write when the urge strikes. Boy, did I get hit today!

® Jackie: Lewis is around here somewhere; just not sure where.

I should rather think, Rob-bear, that love, compassion, and all other human feelings do have a scientific explanation. They are, after all, natural phenomena.

®Snowbrush: And the scientific explanation would be . . .?

I meant that they are organically based as opposed to other-worldly, and that they evolved (as did the other characteristics that define our species) because they enhance our odds of survival in ways that are often quite obvious. What would your explanation for their existence be?

® Snowbrush: Sorry to be so slow in replying. I think I lost track of this comment somewhere in the process.

I can see animal lust as being organic, or the human equivalent (which we might even call passion). That's built-in reproductive "programming" (for lack of a better word) aimed at the survival of the species.

But human lust and human love (or compassion) are two entirely different things. You can have one without the other, either way. Lust, being organic, you can deal with scientifically. But love?

The test case would be for you to prove, scientifically, that you love Peggy.

Nellie from Beyond My Garden said...

I see no conflict between religion and science. All truth comes from God and points to God. If we fully understood all of nature, (science) we would be much closer to understanding God.
nellie

® Beyond My Garden: Thanks for visiting, and for adding your thoughts!

About the icon of St. Anthony . . .
The icon comes from Eastern Christian Supply Company. With thanks!

St. Anthony of the Desert

"I no longer fear God but I love Him."
As should we all.

The Story of St. Anthony — and our stories!

In 313, Christianity became the official religion of the Roman Empire. Though the persecutions ended — after their many terrible deaths — the Church began to face new problems. It slowly began to conform itself to the values of the world, much like the Church of the 21st century has done, particularly in Europe, Canada, and the United States.

Rather than be assimilated, some of the 4th century Christians chose to leave society. One was Anthony, born in Coma (Upper Egypt). After giving away his inheritance, he moved to the desert, and spent many years in various Christian disciplines, gaining wide and deep experience of the life of faith. What he learned in the desert — his epiphanies — shaped his life. When he finally returned to society, people recognized him as a truly wise and holy man.

◊ ◊ ◊
While we may not be able to go to the desert, we can learn — and expect God to give us new revelations and wisdom — our own "desert epiphanies."

Companions on the Way 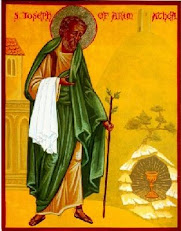 According to tradition, he was an uncle of Jesus' mother, and brought the young Jesus with him to Britain while on business. There are also suggestions that Joseph later established Christianity in Britain.